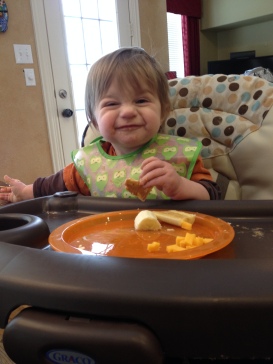 So, here’s the deal. Everett is an awful conventional eater. No surprise there since we struggled with bottle feedings and again struggled with the introduction of solids. Several months in occupational therapy, and he finally takes solids but it’s limited.

Oreos were the first actual solid he willingly took. And, for a while, they were a staple in his diet. From there, he began accepting other types of cookies and various crackers. Pretty sure those baby teeth are going to rot out from that menu.

Eventually, he welcomed cubed cheese and the occasional spoonful of oatmeal into his diet. And, that’s where it ended.

I’m not sure cookies, crackers, cheese, a scoop of oatmeal, and a liquid vitamin he often vomits back up would be considered a well-rounded meal. And, I can’t bear the pediatrician’s advice of only offering him what we are eating for each meal. Tried that. He eats nothing and then wakes up screaming and starving in the middle of the night. Something had to change. So, I got creative.

I scoured Pinterest looking for recipes incorporating hidden veggies and fruits and pulled out some of my old favorites from when Austin was younger. My tried and true recipes for Austin were not such a hit with Everett. Usually, they were tossed to the floor with Everett grinning ear to ear. He was taunting me. “You’re going to have to do better than that, Mom.”

Recipe after recipe, he rejected. I have cooked a lot over the last few weeks, and, really, I dislike cooking. Up until a few years ago, the extent of my culinary expertise was Mac ‘n Cheese… from a box, toast, and driving through Chick-fil-a. The hubby certainly didn’t marry me for my skills in the kitchen. But, since then, I have expanded upon that and can cook meals for my family (as long as it has less than five ingredients). I was determined to make something Everett would eat.

And, then one day, I discovered the “in” to Everett’s eating. Saltine crackers.

We started with peanut butter. He loved it, and we love that it’s an excellent source of protein. Score one for us. Several days passed, and I was feeling “daring.” I smothered the cracker in cottage cheese, expecting him to throw it back in my face. He ate it. And, another. And, another.

This is about the time I started brainstorming all the concoctions he might eat off a saltine cracker. After he tossed his banana for the 50th time, I tried mashing it up. I spread a chunky layer on the cracker and handed it back over. He surveyed this new paste then promptly beat it against the tray until all the banana had slid off. Score, Everett.

I gave him a couple days and tried again with the banana, but this time, making it a smoother paste. He devoured three banana crackers with no hesitation. The key is in the cracker.

Since then, we’ve used strawberries, turkey with melted cheese, and the most recent, green beans with melted cheese. So bizarre. It’s even more bizarre to me because this kid would not touch purees, and he still won’t. Unless it’s mashed on a saltine. Oy.

But, it could be worse. He could want everything atop an Oreo. Mmm… Veggie paste Oreos.

One thought on “a foodie of sorts”