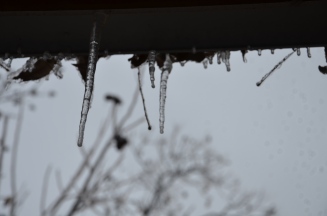 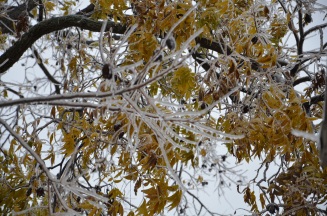 In Texas, when it ices, the entire state shuts down. At the mere mention of snow, a 15-car pile up will occur in a matter of minutes, and people will begin swerving as if each piece of sleet is a land mine.

Welcome to Ice-pocalypse 2013. The sleet began on Thursday. The grocery store shelves were bare by that evening. People fought over chicken and bread. And, the entire Dallas-Fort Worth Metroplex went into hibernation.

Friday morning came and the entire area was a sheet of ice. All across the Metroplex, life stopped as people were “trapped” in their homes. We went to Starbucks.

We lived in Colorado for a couple years. The hubs is from there. While I hate all things ice, snow and cold, I moved back to Texas with a hint of Colorado in me. Shhh… Don’t tell the hubs. I’ll never hear the end of it.

Experiencing an ice storm after moving back to Texas is a surreal thing. Before, I joined the masses and shut down life until every drop of ice vanished from the road. This time around, we pretended we were still in Colorado and went on with our lives.

We still spent the majority of time snuggled away from the cold, but we also experienced a bit of the Metroplex in undisturbed peace. We sipped hot chocolate and saw beautiful fields of icy grass. We spotted icicles as long as Everett. And, we shopped Target as a ghost town.

Five days into the ice-pocalypse and things have finally begun to thaw. Life returned to semi-normal today. The highways still crawled, but people were out. I’m almost convinced that the mere sight of ice on the side of the road is about as hazardous as it being on the road itself.

But, the good news is that ice is melting everywhere. The streets are clear, people are breaking free, and Starbucks has re-stocked their pastries again. Congratulations, Dallas-Fort Worth, you survived the ice-pocalypse 2013. Here’s hoping for a tropical Christmas 😉 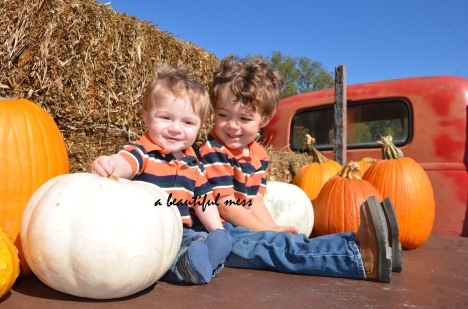 It’s fall in Texas. The mornings are cool and afternoons toasty. Only a handful of trees have received notice of the season change. And, the only true indicators of fall are incited ourselves.

Here in Texas, where the weather boycotts cold fronts, we celebrate the spirit of fall. We do pumpkin lattes in 80 degrees, oversized wreaths exploding with leaves and scarecrows, and we do pumpkins. Lots and lots of pumpkins. Did you know there are at least 10 pumpkin patches all within a 10-mile drive from my house? I love it.

This fall, a number of obstacles have kept us from a trip to the pumpkin patch. But, I decided to throw sanity and priorities aside – who needs to grocery shop? -, so we could have our day at the patch. I’m a sucker for perfect pumpkin pictures.

I recruited my mom to help wrangle the boys. We took them to this great farm called Big Orange Pumpkin Farm in Celina, Texas. It’s a beautiful farm with pumpkins, animals and tractors. A little boy’s dream. I couldn’t wait to let loose the camera.

After dragging the boys across the farm for picture after picture, and halfway blinding them with the flash, I gave up. If one wasn’t crying, the other was trying to make a break for it. And, Austin didn’t even care about the pumpkins. What was the point? So much for those fall photos. Begrudgingly, I handed Austin the cup of animal feed that I had been leveraging for cooperative, smiling pictures. As he ran off with his prize, I continued to scroll through my photo fails when I heard it.

Giggles. Sweet giggles were erupting from my Austin. He laughed and smiled as the goats gulped feed from his tiny hands. At first, all I could think was how badly we would need some hand sanitizer after this. But, then I watched. I really watched. There was pure joy and wonderment pouring from him. We stayed there for a while, soaking in the moment. Austin pet the goats, inspected each one and begged for just enough food to feed the rest of the animals. He even found a posse of goats and dubbed himself their leader, chattering away at them with explicit instructions not to eat the rocks they appeared to be licking.

This is what this trip was about. Not about the pictures to remember this day, but about making the moment itself and making that memorable. Pictures sure do tell a sweet story, but it’s even sweeter living it. 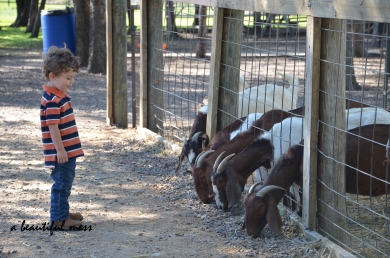 peace of mind for texas mommas

Way to go, Texas! I couldn’t help but share the above link. As a heart baby Momma, this piece of legislation is a great step for diagnosing these heart defects from the beginning. While E’s condition was not Critical Congenital Heart Disease, we had no idea about the problem until two weeks after he was born. This law will save so many lives and offer peace for moms. Great job, Texas.