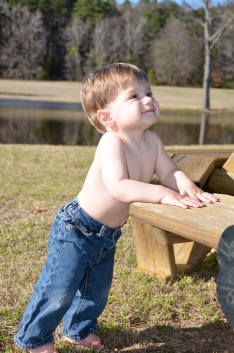 This week marks Everett’s one-year anniversary of his heart surgery. March 11 is the day Everett’s heart became new, and he could finally breathe easy.

When I think back to where we were one year ago, the feelings are bittersweet. My heart aches remembering the worry, the unknown, the exhaustion, and the pain my two-month-old son had experienced in his short little life. But, the week following surgery, there was joy. There was hope. There was relief. And, for the first time, there were smiles from our sweet Everett.

How far he has come in only a year. We didn’t know what his future would look like following surgery – Whether he would be delayed, how long he would require the NG tube, whether the surgery would work.

On the week celebrating his first anniversary, Everett is taking his first continuous steps. We have a walker. He has overcome all the obstacles, big and small, from this past year. And, today, we have a happy, healthy little boy.

There will always be worry and concern that his heart is causing problems again, but, for now, our life is crazy in a normal way. We have a newfound toddler who never ceases to explore the world around him, who already has a determined personality, and who smiles through all life’s hiccups.

I never could have imagined this is what life would be like a year after surgery. Or, how beautiful that scar would look through my eyes. I never dreamed he would be walking, talking and causing mischief like any other child his age. I thank God for my miracle. Happy Heart Day, Everett.

*Thank you to a special friend for the inspiration for the title of this post. It seemed too perfect.

Two days home from discharge, and we knew something was really wrong. Everett cried nonstop. He was pale. He was sweating through his clothes and mine. And, his breathing was increasingly faster. These were all symptoms of his heart failure. And, he had maxed out his medications. We knew at this point, he wouldn’t be making it to our goal of four months without the surgery.

We moved his appointment up with the cardiologist from Friday to Tuesday. They did an echo, and things had changed. To everyone’s surprise, his heart was deteriorating faster than previously estimated. He needed surgery soon.

Everett was sent immediately to the  Cardiac ICU, where he was started on strong IV medicines. The plan was for him to stabilize for surgery the following week. The week was filled with new monitors, new medications and uncertainty. The Saturday before surgery, he spiked an unexplained fever, and we were no longer sure if he would be able to move forward with the surgery. If he still ran a fever on Sunday, we would have to discuss our options. But, God provided a miracle, and by Saturday night, he was already fever free. It left as quickly as it came on.

We didn’t sleep the night before surgery. We both stayed at the hospital, and I stayed in the room with Everett. Early morning came, and the nursing staff prepped him for surgery. As the sun awakened outside his room, sun rays and peace filled that little room, and I knew God would be with this child today. And, then, it was time.

It’s an odd experience handing your child over for open heart surgery, feelings of shock, disbelief and terror. As soon as they rolled him away, I broke down. I heaved and sobbed an ugly, ugly cry. Philip and I just held one another, praying for our sweet baby boy. The surgery lasted several hours. Family and friends surrounded us that day, praying for our sweet Everett and keeping our minds from wandering to the “what if” place. I am forever grateful to all of those people.

We received updates throughout the day, but the relief came when the surgeon appeared before us. He had finished, and things looked to be successful. But, his valves were in rough condition, and only time will tell if another surgery is needed down the road. We learned that surgery was only half the battle. The 48 hours following would be critical.

We were able to see him soon after surgery. I knew he would look rough, and I had prepared myself. But, nothing can really prepare yourself to see your two-month-old fresh from open heart surgery. As the nurses busied around him nonstop, I stroked his tiny hand as he lay there so small and helpless. Several minutes passed, and I needed air. I left the room, fell to the floor and sobbed my eyes out.

Philip sent the rest of our family away for the day, after I informed him that if anyone else was going to cry in the room with Everett then they were not allowed in. I was not strong enough for anyone else that day, and I just couldn’t bear it.

A day after surgery, Everett had already exceeded the surgeon’s expectations. He was off the pacemaker and only required minimal amounts of medications. There is no doubt that he is a fighter.

Two days after surgery, I was able to hold him. And, boy, did I hold that baby. The rest of the time in the hospital, I rarely left his side. The nurses would constantly remind me to stay hydrated and urge me to go eat. But, I was with my heart warrior, my little miracle, and I wasn’t going to let him go. 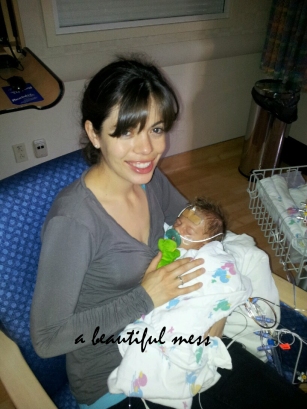 And, on the third day, Everett smiled. Not a “Was that gas?” kind of smile, but a full open-mouthed grin. There was color in his face, a light in his eyes, and a smile on his face. The Lord had blessed us.

Within a week of surgery, Everett was discharged home. And, this time, it was for good.

These past six months have still been filled with struggles, but more so, there has been joy. The joy of being together. The joy of overcoming such huge hurdles. And, the joy of appreciating and loving one another.

God has indeed blessed us with a beautiful mess.